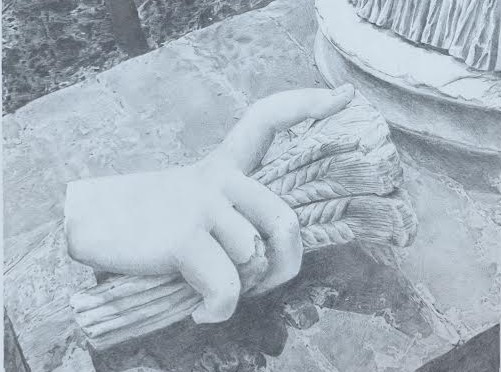 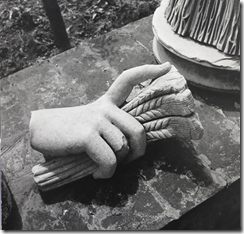 Therese Keogh was invited to create work for the Sievers Project, an exhibition at the Centre for Contemporary Photography that revisited the work of a major Australian photographer who documented the glories of industry in the 20th century. Keogh was drawn to Sievers’ photograph of a severed hand holding a sheaf of wheat, a fragment of the marble statue of Ceres in Rome. She discovered that much of the imperial marble was eventually transformed into quicklime used to make concrete.  It can also be used as a soil amendment to counterbalance soil acidity. In order to investigate this process herself, Keogh sourced a marble pediment of an altar from a church in Ballarat. She then worked out how to fire this marble, which was eventually displayed in the gallery as a block of quicklime.

Keogh’s work witnesses the reduction of art into commerce. This can be seen as a loss echoing the demise of the grand paternalistic world of manufacture once celebrated by Sievers. But it can also be seen as a recovery of value from what is left behind, returning products of human endeavour to the earth from whence it came.

What is interesting from the perspective of South Ways is the adventure of the artist in confronting the material challenge herself, without recourse to external assistance. Her two hands thus provide a tangible link between the various phases of the cycle, moving from monument to earth. They allow us to witness the transformation of matter itself, a dimension otherwise absent from the silvery surfaces of Sievers’ prints.

Below are photos of the firing of the marble with Keogh’s description of the process: 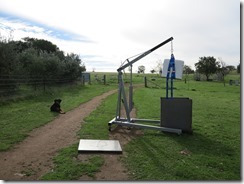 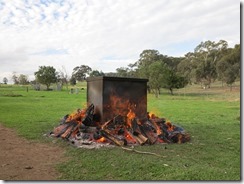 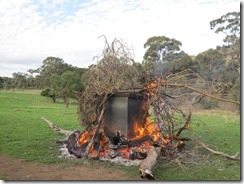 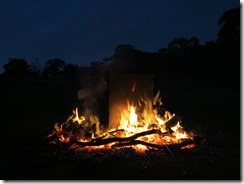 These images show the firing of a marble object inside a large steel box. I started with a block of marble in my studio, and – over a period of several months – chipped away at its surface. I didn’t begin this process with an end point in mind. Part of me was looking for a fault in the marble, and so I kept carving in the hope that the stone would reveal its weaknesses, which would then allow me to stop. But one day the mallet I had been using broke with the force and repetition of the carving. The mallet’s head split in two, and it was like the marble was reacting against its own transformation. So I stopped.

Marble is a form of calcium carbonate, metamorphosed from limestone. When fired, the carbon dioxide trapped inside is burned away, transforming the calcium carbonate into calcium oxide, or quicklime. Quicklime doesn’t occur without human intervention, and is used for a variety of applications (including as a base ingredient in concrete, and, in agriculture, as a soil amendment to neutralise earth with high acidity). It is called quicklime (from the original meaning of the word ‘quick’ as something that is alive, or living) because when it comes into contact with water a chemical reaction takes place that creates extremely high temperatures, and has been known to cause severe burns to the skin of people working with it.

Once the carving had finished, I constructed a steel box that would house the marble during its firing. The box protected the marble from the smoke of the fire, and allowed it to be heated more evenly.

My mum owns a property in Central Victoria, where I took the marble and the box to be fired. I propped up the box, with the marble inside, on four bricks in a paddock, and built a fire around it. The fire burned for about eighteen hours, as I stoked it through the night. When it had died down, I took the lid off the box. The marble – now quicklime – had cracked as it heated and cooled. Its surface had changed from being luminous to kind of chalky, as its chemical composition was irreversibly altered from the fire.

Therese Keogh is a Melbourne artist – www.theresekeogh.com. Featured image at the top of this page is her hand-drawn version of the original Sievers’ photo.

In response to a question about how the idea for this came about, the artist provided the following explanation:

I started by looking at a photograph that Wolfgang Sievers took in the Forum while he was travelling through Rome in 1953. The photo shows a severed hand of a marble sculpture, holding a sheaf of wheat. It is the right hand of Ceres, Roman goddess of agriculture.

Depictions of Ceres generally show her holding wheat in her right hand, and a torch in her left. From this I began investigating the material links between the wheat and the fire, by looking into the practice of stubble burning, where control burn techniques are used to clear farmland in preparation for a future crop. I was also very interested in the severed hand, and trying to understand what it means when a hand (which in this case is also a crafted object) is severed.

From the stubble burning, I started thinking about what would happen to marble if it were confronted with the same conditions as the paddock, and how it would react to being burned. I read about the production of quicklime, and about how during the Renaissance in Rome people began using concrete again for the first time since the fall of the Roman Empire. There are accounts of people constructing large lime kilns within the city, and dismantling buildings and sculptures, made hundreds of years earlier, to fire them, to produce quicklime, to make concrete, to build new buildings. I find this practice of actively rebuilding history through an erasure of the past very interesting, but also very violent.

Marble formed in the earth as early as 400 million years ago, so while the firing was erasing peoples’ histories, it was also erasing the earth’s. As people worked with the quicklime, the moisture from their hands sparked a chemical reaction resulting in temperatures as high as 800°C. The potential burning of the hands through this process is like a re-severing, where the material of the quicklime becomes literally impossible to handle.

Quicklime has a second use, as a soil amendment in agriculture. Repeated stubble burning over a number of years will leave the soil very acidic, and infertile. To counter this acidity, either lime or quicklime is deposited over the earth after the annual fire to neutralise the soil.