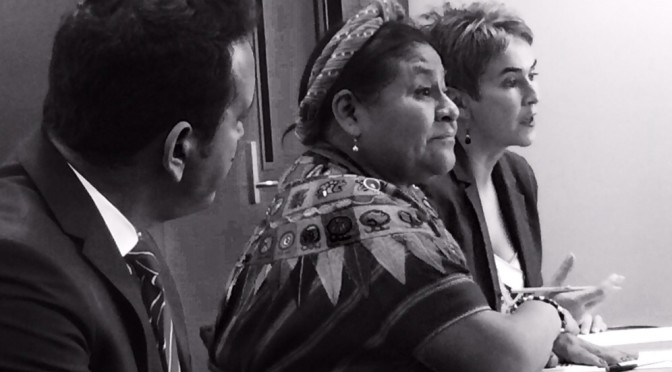 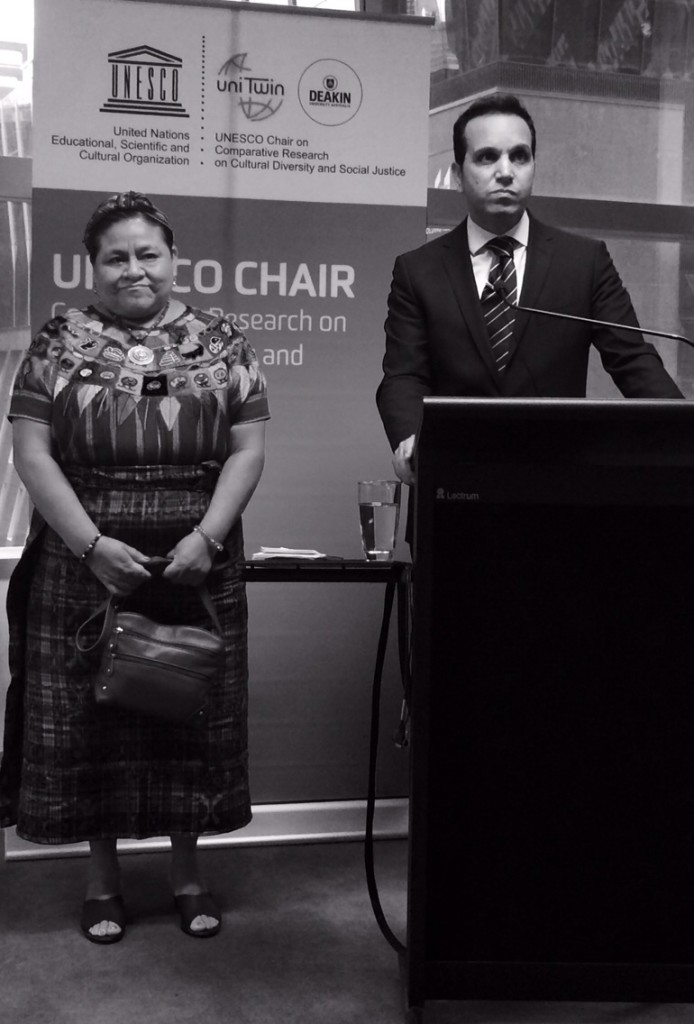 On Wednesday 29th of July, Nobel Peace Prize Laureate Dr Rigoberta Menchú Tum delivered the UNESCO Chair for Cultural Diversity and Social Justice Annual Oration at Deakin University. Since its inception, the UNESCO Chair Program has promoted the establishment of hundreds of UNESCO Chairs and UNITWIN Networks, serving the dual function of ‘think tanks’ and ‘bridge builders’ between academia, policy-makers, local communities, research and civil society (UNESCO 2013). The Alfred Deakin Institute for Citizenship and Globalisation was endorsed with this prestigious recognition in 2013, when Prof. Fethi Mansouri was awarded the UNESCO Chair in comparative research on ‘Cultural Diversity and Social Justice’. Due to her illustrious career in the struggle for Indigenous rights and ethno-cultural reconciliation, Rigoberta Menchú Tum was chosen, and kindly accepted the invitation, to be this year’s orator.

Rigoberta Menchú Tum was born in 1959 into a Quiche Mayan peasant family in Guatemala. A year later Guatemala was plunged into a civil war that lasted 36 years. It has been estimated that the civil war caused the death of 200,000 people, the displacement of more than half a million people, and the destruction of countless Mayan villages. The worst of the war came between 1979 and 1984, ‘during which over 90% of the total human rights violations were committed’ (Chamarbagwala & Morán 2011, p. 42). In 1982, following the military’s systematic oppression of any form of insurrection, and after the death of several members of her own family, Menchú Tum fled to neighboring Mexico. At that time, she was virtually unknown in her own country. It was after the death of her father in 1981—when he was burned alive by the Guatemalan army in the Spanish Embassy along with another thirty-eight members of the Committee for Peasant Unity (CUC)—, that Menchú Tum’s public visibility started to grow (Arias 2001). In 1983, she published I, Rigoberta Menchú: An Indian Woman in Guatemala, a gripping document that charts her path to political awareness and which attracted international attention and courted controversy. Since then, she has become an icon of indigenous resistance, a leading advocate of indigenous rights and a voice in recognition and reconciliation processes, not only in Guatemala but globally. Her work has earned her several international awards, most notably, the Nobel Peace Prize in 1992 (The Nobel Foundation 1992).

At Deakin University, Menchú Tum spoke on the guiding principles of her philosophy and of her ancestral knowledge – a model for another way of thinking. Her message was to imbue all our actions with a dose of our humanity, and for those of us working within academia, to put ourselves in the service of the world and to work towards an ‘integral academic vision’. This approach entails three different dimensions: human beings are composed of a spiritual, a material and a social dimension, which need to be in equilibrium with each other. The emphasis on materialism, and the lack of consideration for the spiritual and social dimensions, has had disastrous consequences for the times we live in. This is grounded on the premise that ‘what happens to others happens to us’. In this way, the need to bring together the personal and the collective is an important means to enact community practises of mutual respect and cooperation. The practise of respecting others, of acknowledging and seeing others, must be central to our behaviour and code of ethics.

For Menchú Tum, the social is built on the practise of a true egalitarianism that emphasises our social selves within a collective, with the aspiration of bettering ourselves in the service of others. This, Menchú Tum cites as the creation of a ‘culture of peace’. According to Menchú Tum the biggest secret of human beings is humility, as it is through humility that we can experience gratefulness towards other living creatures and towards the earth. Without dismissing the material dimension–for we are material beings—we should be content to take only that which ‘fits in our hands’ and leave the rest to others, as when we accumulate beyond our needs we are taking what is meant for others. Menchú Tum’s words, derived from the accumulated wisdom of her Mayan ancestors, spoke of a ‘science for life’ that provides guiding principles to live and to address three pressing questions: Who am I? Where do I come from? And, Where am I going? According to Menchú Tum, answering these involves seeing, listening and feeling. Our eyes, she tells us, are not enough.

For social scientists this requires developing new standards and categories of ‘knowledge’, and to re-consider how knowledge is used and re-produced. For instance, what social scientists regard as Education (with a capital E) within a Western context, and by extension what often defines Indigenous peoples the world over as ‘uneducated’, excludes non-Western epistemological and ontological traditions, and fails to recognise and appreciate other ways of knowing. If Indigenous peoples measured knowledge only within this Western frame, they would loose other ancestral ways of knowing the world. In an academic context measured by outputs, citation indexes and our ability to generate commercial returns, the idea of academia in the service of humanity is a revolutionary stance. And with academic peer-review plagued by gatekeepers and conservatism, opening up research to new ways of knowing the world and accommodating ‘subaltern’ epistemologies is a radical call to action. Any response will require us to shift the value system of the academic endeavour away from competition and the status quo, and towards community, humanity and new possibilities.

Menchú Tum has been often characterised as a ‘subaltern voice’ and has herself become an ‘object’ of study under the intensive scrutiny of Western intellectual elites. In particular, as Arturo Arias (2002) has argued, the controversy regarding Menchú Tum’s testimonio should be interpreted as ‘a symbolic lesion (lesson?) about the unwillingness of hegemonic intellectuals to listen to subaltern ones’ (p. 481) – part of a broader tendency to distort and transform other voices with the aim of misrepresenting ‘subaltern’ narratives. At one point of her oration, recalling the torture of her family members, tears welted in her eyes, yet her message was an optimistic one: to promote a different ‘code of thinking’; to reconfigure ourselves in the contemporary world. Those of us working within humanities and social sciences, and more broadly within academia, cannot be impassive in the face of these requests. We are left pondering on the need to open up new horizons of inquiry and on how to accommodate different perspectives within our academic endeavours. Undoubtedly, this will also require listening and engaging with seriousness and respect to the wealth of Indigenous scholarship and other knowledges. Today, the still-apparent lack of an intellectual investment in this direction, as Rigoberta Menchú Tum stressed, is frustrating any real possibility to enact other ways of being in the world.