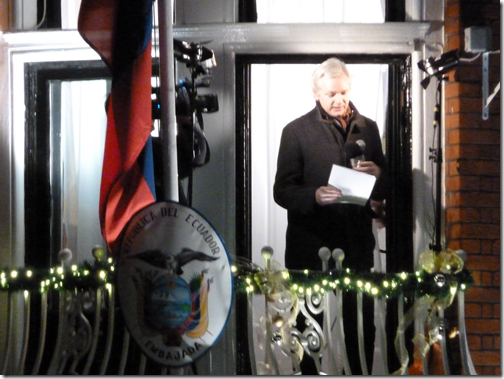 As we mark the 50th the anniversary of The Great March on Washington, and move closer to the 50th anniversary of the assassination of JFK, and in my own country of Australia, the celebration of the 50th Anniversary of the Yirrikala Bark Petition for Indigenous rights. I therefore cannot but help think history may record 2013 as a watershed year that is looked back in history as a defining moment in the political history of the West. This historical event is the beginning of the young Westerners cleaning up their own political back yards. It is as though in my mind this year marks ‘key events’ that may trigger a consciousness amongst the young people that have had enough of the bullying by their governments in holding the globe ransom to their overzealous beliefs in their own righteousness.

James Douglass in his book JFK and the Unspeakable: Why He Died and Why It Matters brings to the readers attention that ‘the Unspeakable’ is the manifestation of evil on the globe at the behest of powerful ‘unknowns’ in the United States, who 50 years ago orchestrated the assassinations of JFK and the subsequent assassinations of Martin Luther, Malcolm X and finally Bobby Kennedy.

The use of the generic term of ‘the Unspeakable’ allows for a distancing of individual blame to that of a – sickness of heart – which pervades Western rulers and their sense of righteousness, then and now. A sickness which some youth can no longer tolerate, as it is their future which is being destroyed politically, economically, and worst of all, climatically, by this evil.

Oliver Stone in support of Douglass is also on his own mission to educate the American youth about their history that allows this evil to thrive. He is horrified by the ignorance of the average American and so has directed and written the series The Untold History of America. Such valiant attempts gives one the impression that they are looking for the reincarnation of at least one of the ‘golden’ four to step forth from the modern generation of youth. This desire is a bit like a desire for a messianic resurrection of a saviour.

Can I put forth however, that instead of a golden haired or black hair boy, what instead we have is a gender crossing Chelsea! Both the mythologist in me as well as the satirical black-humour from my Indigenous heritage cannot but help make associations which perhaps the fact driven elders above might overlook.

Let me begin by saying, what I see in the evil of the Unspeakable is a combination of the homophobic cross-dressing Edgar J. Hoover and the ludicrous obsession with money which allows the public to still sanction the continued million dollar payments to heads of failed banks. Therefore the heroes who take on this force no longer look like a Hollywood-Kennedy or sound like the magnificent orators; Martin or Malcolm, but rather look more like penniless nerds and grrl power. That is the enemy of the unspeakable is actually the alter ego of the above. On one hand we have Bradley proudly declaring he is Chelsea – none of that cupboard gay stuff for him – and the Assanges and Snowdens dumping their credit cards and relying on mobile phones and friends to help them free the Free World from its cyber chains.

What these three men/woman have done is to cyber-picked the backdoors of the great and powerful; looked inside and caught them with their pants down and promptly photo’d, digitalized and duplication in 3D copy the crown jewels, and sent them out into the universe of cyberspace all for free. And I think that is the most revolutionary act of all. It was free! And that’s what the money addicted nations and their bullies can’t abide, its was given away for free!

The source of this youthful clean up job, which is predominantly in the North, has come from the South and surprisingly from the odd-bod country Australia that suffers from an identity crisis, in that it thinks it is in the North when in fact it is in the South. It therefore, is not surprising that this southern bastion of northern values has thrown up another odd bod in Julian Assange. Julian and his fellow young hackers learnt very early how the little backdoors of the cyber world worked. And in true Aussie style after viewing the content of Pax Americana realized it was a whole lot of the guff about ‘bringing democracy’ to the downtrodden. The rise of Wikileaks in turn allowed American youth to take on ‘the Unspeakable’ and its manifestations of evil as Manning saw in the now infamous Bagdad tapes and Snowden saw as a cyber matrix within which all Americans live. A cyber matrix which when we look closer however is not funded by the North, but in fact those countries who identify with the Global South.

BRICS as we are all aware on a subliminal level will redefine the geopolitics of the world and so The Global South, might be reconfigured to East or West of the Great Wall of Chinese Economic dominance which is running laterally through the globe rather than horizontally. But then again as China prefers to economically coerce nation states into being tribute states, the definition of where each nation state finds themself on the global map might be something quite different. However, one thing is for sure, Australia will no longer be a favoured nation of a Pax Americana world, but rather a tribute state of a BRICS cultural and population dominated globe. Pax Americana can run around snooping on everyone if it wishes to waste its resources that way, but we all know who is funding the credit card the US is using to pay the bills. But there is something else we didn’t know.

Having read Cyberwar: The Next Threat to National Security and What to do About (2010) it by Richard Clarke and Robert Knake, and had Clarke not been the National Coordinator for Security, Infrastructure Protection and Counterterrorism under four presidents, I would have thought I was reading a George Clooney script.

The extent of Chinese government hacking against U.S., European, and Japanese industries and research facilities is without precedent in the history of espionage. Exabytes of data have been copied from universities, industrial labs, and government facilities. The secrets behind everything from pharmaceuticals formulas to bioengineering designs, to nanotechnology, to weapons system to everyday industrial products have been taken by the People’s Liberation Army and by private hacking groups and given to China Inc. (Clarke and Knake, 2010, p.59)

A nation couldn’t be that stupid to let this happen, but it could be that arrogant to miss the obvious! And that is the flaw of the ‘the Unspeakable’ – its arrogance!

And it is this very kind of arrogance that finds ‘the Unspeakable’ being confronted by enemies who look like characters out of films like Midnight Cowboy or Fisher King. Who would have thought a gangly look-a-like comic super hero with silver hair and a broad Aussie accent would teamed up with a petit transsexual who even after three years in high security prisons and solitary confinement could articulate himself like Atticus Finch and take the high moral ground in relation to his actions. And then after being sentenced to a life time of imprisonment, pulls the hat trick of wanting transgender therapy based on his human rights, which will give the military more headaches than any leak every did. It is like Manning now Chelsea Manning is tapping into the American hysteria over same sex marriages and playing the hysteria for all it is worth. And now we have Snowden to follow up, once again able to outwit the most powerful nation in the world with the advice from the Aussie and his mates at Wikileaks. I mean landing on the doorstep of Russia and Putin calling it an ‘unwelcome Christmas present’? Christmas present? Doesn’t that ring warning bells and now we have him staying until Christmas! Now I don’t even think Woody Allen could come up with a script as good as that. I mean who is writing this reality show, it is all becoming too scripted.

And so the Global South has provided an unintended hero, the leader of the pack, in Julian. But what of his own country where he is treated like a common criminal? Well if China pulls the plug on the US credit card, mark my words in ‘true blue’ fashion Julian will overnight become a national hero. As China and her mates slowly but surely ingratiate themselves into everyone’s backyards through their wiz-bang gadgets and very cheap goodies which the silly souls that inhabit the West have greedily feed themselves on for the past decades as the third world exists on their donations. How embarrassing to know, we have for decades given food aid and fund small projects, while China now ready to step up to the table goes in and builds infrastructure, you know railways and roads for transporting goods.

I think the Unspeakable is being challenged at a very fundamental level if not at the mythological. A new type of mythological super hero is building momentum. And just like all good super heroes they are not overt bullish figures like Arnie as the Terminator or Downey Jr as Ironman, but in fact are nerds in real life. How the transgender issue will be treated I will leave that up to the feminist, but then again maybe that is the only way a women can get into the male dominated myth making world of the West!

The South therefore in my opinion is on the verge of realignment, not by its own volition but one forced upon it by geopolitical shifts of tectonic proportion. Pax Americana may appear to have sway with its nemesis of the Unspeakable driving it towards further unspeakable invasionary tactics, but there is a greater force out there and it is not the force of good or some Godlike benevolence, it is just the force of history; time is up for the West and it is now BRICS turn in the form of the Chinese century which will look nothing like the American or British century, it will be far more sophisticated and therefore far more dangerous for the complacent. So all I can say we are going to live in interesting times and I am glad Julian is from The South.

Dr C.F. Black is author of The Land is the Source of the Law.

One thought on “A Revolution for Free!”