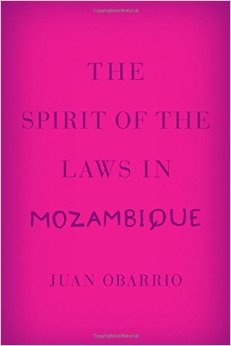 Mozambique has been hailed as a success story by the international community, which has watched it evolve through a series of violent political upheavals: from colonialism, through socialism, to its current democracy. As Juan Obarrio shows, however, this view neglects a crucial element in Mozambique’s transition to the rule of law: the reestablishment of traditional chieftainship and customs entangled within a history of colonial violence and civil war. Drawing on extensive historical records and ethnographic fieldwork, he examines the role of customary law in Mozambique to ask a larger question: what is the place of law in the neoliberal era, in which the juridical and the economic are deeply intertwined in an ongoing state of structural adjustment?

The Spirit of the Laws in Mozambique: Juan Obarrio.